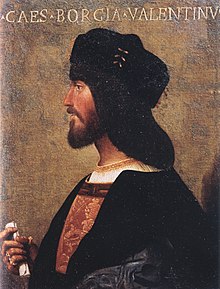 ‘Aut Caesar, Aut Nihil’ which means ‘Either Emperor or Nothing’ is the resonant, powerful motto we immediately associate with Italian Renaissance Prince Cesare Borgia. The phrase most likely coined by Julius Caesar himself, indicates sky high ambition for power and fame and the desire to succeed at all cost. Cesare was however not the only one to use it. Others did as well, both before and also after him.

Like marketing campaigns in our modern day, Cesare used various tools such as mottos, paintings, weapons and costume to make strong statements about himself, his culture, power, taste and ambition. Many of these tools were directly related to the Roman General Julius Caesar with whom Cesare Borgia liked to identify himself. His marketing campaign had only one purpose: to signal to his enemies and the people in Italy that a new powerful leader had risen; one that would stop for nothing. ‘Aut Caesar, aut nihil’ was probably first used by Cesare on banners that hung from the walls of Castel Sant’Angelo when he made his triumphant entry into Rome in 1500. After his downfall, the motto would be ridiculed by his enemies and they scoffed at the fact that he had reached ‘nihil’ (nothing).

Ladislao I d’Angiò-Durazzo (1377 – 1414), king of Naples from 1386 until 1414 seems to be the first one in history to have used the motto for his campaigns. Like Cesare Borgia, he was a skilled political and military leader who managed to conquer great parts of Italy.

Curiously, Isabella of Portugal (1503 – 1539) wife of Emperor Charles V (1500 – 1558) used the phrase as her personal motto. This is a remarkable coincidence and a mysterious one as who both despised Cesare Borgia. Why would Isabella use a motto that belonged to her grandparent’s enemy? At first, I believed the answer would lie with Isabella’s mother, Maria of Aragon (1482 – 1517), daughter of Ferdinand and Isabella. Who knows she might have met the charismatic prince when he was imprisoned in Spain and perhaps his story might have inspired her to tell her daughter. Maria, however, was already in Portugal married to the King when Cesare arrived in Spain as a prisoner. Besides, pious to the extreme, she gave birth to 10 children and was not exactly the type of person to find admiration for a defrocked cardinal turned warlord. The legend, however, goes that initially Charles V did not accept the marriage proposal to the Portuguese infanta Isabella. When Isabella heard this, she is said to have whispered to her father: ‘Either Caesar (emperor) or nothing’. Isabella married her emperor anyway, and the two were apparently quite in love with each other. Isabella must have thought it a powerful phrase and turned it into her personal motto.

Even Wolfgang Amadeus Mozart was presented with the phrase. When young Wolfgang seemed to have eyes only for singer Aloysia Weber, his father wrote him a letter urging him to focus and to dedicate himself to his career to become the best musician ever.

Bemis, “At the Court of the Prince: The Patronage and Art Historical Legacy of Cesare Borgia, 1492-1503.”