Home > Blog > Borgias > How did the Borgias celebrate Christmas? 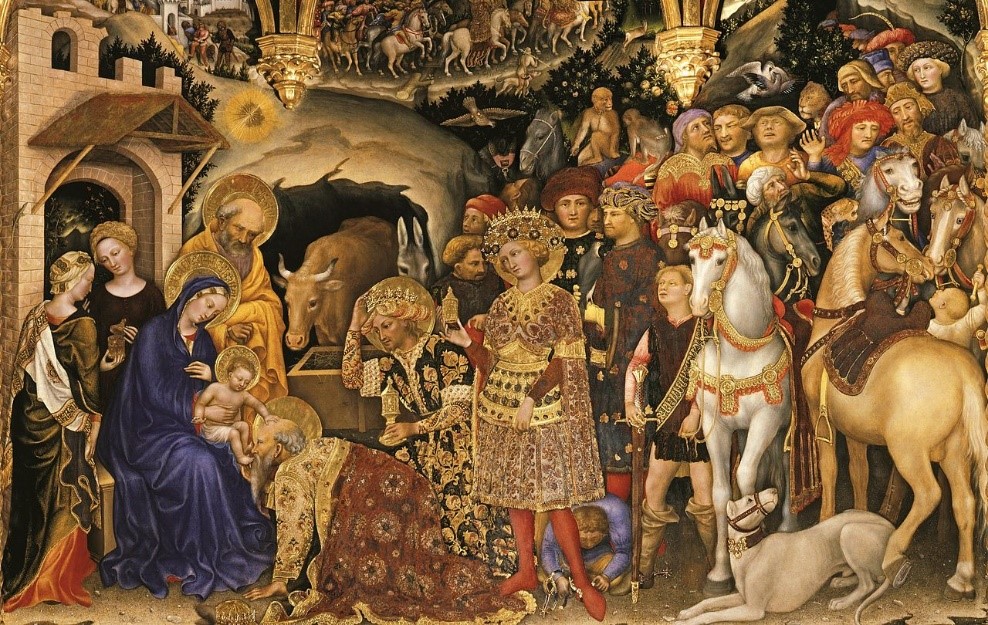 How did the Borgias celebrate Christmas?

Well, like we do today, they began the Christmas month with advent, and if they were devout, which this cardinal family should have been (at least to a certain extent 😊), they spent the weeks up to the 24th in penitence, perhaps abstained from intercourse or fasted until Christmas Eve. From the ninth day before Christmas, the Novena began; a time for reflection on religion, praying and singing Christmas songs. On the evening of 24 December, the Borgias went to church to attend ‘the vigil of the nativity’ and also on Christmas Day, the 25th, a special grand mass was held. It is said that for these special occasions, Pope Alexander VI put out all the stops for a solemn and sumptuous mass in Saint Peter’s Basilica for which he used the missal in the picture below, a liturgical manuscript made especially for him in the 15th century. 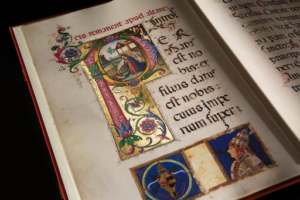 The churches and St Peter’s Basilica were adorned with fir trees decorated with wafers and apples symbolizing the tree of Adam and Eve, with boughs of evergreen and with many nativity scenes.  These nativity scenes were particularly popular in the Renaissance and seemed to have been initiated by St. Francis of Assisi in 1225 who wanted to emphasize that Christmas was all about the birth of Christ and not about giving gifts. Something we should learn from today as well. On Christmas Eve, the Borgia family would probably have sat together around the table to enjoy  a frugal dinner, a symbol for their unity, love and the strength of the family. Around them, they would have smelled the decoration of dried oranges and lemons.

The true festivities began on 25 December and they lasted all the way until Epiphany on January 6 when gifts were given to each other. During those days, on the main square of the towns, a ‘Yule’ log (like the evergreen, another reminiscent of pagan traditions) would burn as a symbol that the negativity of the past year went up in smoke. Gift giving was done on Epiphany , the day the three wise men came with their presents.

In the Italian Renaissance, there was no Santa Claus; however, there was an old witch-like woman who supposedly had been asked for directions by the three wise men on their way to Bethlehem. They asked the old woman if she wanted to join them to their destination but she refused. When she realized she should have gone along, it was too late and legend says that each year, she visits every house to look for the baby Jesus. This woman is called La Befana and she is the Italian version of Santa.

Cesare’s Christmas celebrations from 1498 until 1507

From 1498 until 1507, Cesare Borgia spent his Christmas in various places and in very different circumstances.

In 1498, he was a visiting courtier at the French court, celebrating together with King Louis XII and his wife, Anne of Brittany. This Christmas was probably not very joyful for 23-year-old Cesare Borgia who was a  laughing stock all over Europe because Carlotta of Aragon, daughter of the King of Naples,  refused to become his wife. Utterly frustrated  by the incompetency (or disguised refusal?) of King Louis XII to execute on his promise to connect the two in marriage combined with insufferable humiliation, Cesare was planning on returning to Rome.

In 1499, Cesare spent his Christmas in the mud next to the canons that besieged the fortress of Ravaldino. Even on 25 December, Catarina Sforza, the Lady of Forli and Imola,  did not hesitate to bombard her own citizens because they had opened the gates of their town to Cesare Borgia. Many buildings were shot to pieces with canon balls on which she had written terrible messages, and a huge number of people died in Imola.

In 1500, Cesare spent Christmas in his favorite city of Cesena and invited the townspeople to eat with him in the former house of Malatesta Novella that he had refurbished entirely. His activities during those Christmas days involved being all over the Romagna not only for military or political reasons but also for entertainment. He moved from town to town, organizing and participating in masked balls, village games, bullfighting, hunting, wrestling, drinking, courting the ladies, and even indulging in childish divertimenti such as throwing mud at passers-by with a little shovel from his horse.

In December 1501, one of the most illustrious weddings took place in the Vatican: Lucrezia Borgia married Alfonso d’Este, Duke of Ferrara  by proxy. The Christmas festivities were extremely sumptuous that year since the Borgias wanted to impress Italy’s oldest aristocratic family. On 18 December 1501, Cesare sent his wife, Charlotte D’Albrèt a package of sweetmeats, white candles, fine confisserie, oriental herbs, oranges, lemons, wax and other luxury items via Venice[1]. Perhaps a Christmas present that survived the destruction of all Cesare Borgia related acts of kindness?

In December 1502, Cesare is again in Cesena. On Christmas day, he went to mass in the Church of San Giovanni Evangelista which was located next to the Rocca of Cesena but which today no longer exists. In the evening, like two years before, he opened the doors of his palace and showed his private life to the public who walked around in the luxury of his existence. The access to his most private chambers where they marveled at all the riches was a slight entrance into his life. The town celebrated Christmas day with more jousting, combats, games, and a bullfight[2], but this year, Cesare would no longer participate and win the prizes. Instead, he would issue the prizes and bestow the honor on the public. Dorothea Caracciolo was probably by his side this Christmas.

In 1503, Christmas probably came and went without Cesare noticing it. He was locked up in the Vatican, prisoner of Pope Julius II (Giuliano della Rovere) and stripped of all his power and land. A political power game between the two men was going on: Julius II wanted Cesare’s strongholds in the Romagna, but Cesare wanted his freedom to return to the Romagna and to recover what he had conquered. This fight of stubbornness would last for many months and would drive Pope Julius II to madness. Cesare eventually would be sent to Spain as a prisoner of King Ferdinand.

In December 1504, Cesare was sighing in his prison in Chinchilla. The year after, in 1505, he spent Christmas day in a tower cell in the castle of La Mota. In 1506, however, Cesare managed to escape and crossed the rough country side of Spain until he reached Viana, where his brother-in-law, Jean D’Albrèt, reigned the tiny country of Navarre.  On 3 December 1506, like the devil, Cesare arrived at the court of Navarre and probably spent a wonderful Christmas being free again.  Venice, Pope Julius II and all his enemies trembled. The people of the Romagna eagerly awaited his return. But Cesare Borgia would never experience Christmas 1507.

Many thanks to the following links:

Reason and Experience in Renaissance Italy By Christine Shaw

Picture of The Adoration of the Magi, by Gentile da Fabriano borrowed from: https://en.wikipedia.org/wiki/Adoration_of_the_Magi#/media/File:Gentile_da_fabriano,_adorazione_dei_magi.jpg