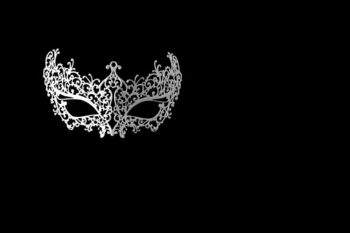 It’s almost Halloween; the time of the year when shops everywhere sell creepy outfits, dangling skeletons and scary masks. During the Italian Renaissance, masks were an everyday sight. Some were creepy such as the grim pest mask, but many were exceptionally beautiful handcrafted pieces of art. In 16th century Venice, balls and banquets were organized on a daily basis, Carnival lasted for months and wearing masks was the norm. Also in Rome, Carnival was a time to forget sorrows, to be happy and have fun, to hide behind masks and not to allow status or gender to hinder interaction. When Cesare Borgia celebrated Carnival or when he met envoys in town incognito, he often wore a mask, both in Rome and Cesena. Masks were worn by doctors to protect themselves from inhaling the plague; they were used in plays, for Carnival, and sometimes they were given as a gift; Isabella d’Este honored Cesare by giving him one hundred handcrafted masks to congratulate him with his victory over his collaborating captains in Senigallia. From 1492, however, masks were suddenly used for an entirely different purpose; they became a tool to hide the horrors of one of the most terrible diseases in the history of mankind: syphilis.

History has always claimed syphilis was introduced in Naples by Columbus’ soldiers who returned infected by the disease on their New World voyages in 1492, but recent research revealed that the disease already existed in Europe before. Nevertheless, in 1495, syphilis became an unstoppable European epidemic that began in Naples and spread like wildfire all over Europe. As there was no herd immunity, the disease ravaged the entire European population worse than the plague ever had done. The German humanist Joseph Grunpeck described it as ‘so cruel, so distressing, so appalling that until now nothing more terrible or disgusting has ever been known on this earth.[1]’ Numerous famous men suffered from the disease throughout history such as Schubert, Schumann, Baudelaire, Maupassant, Flaubert, Van Gogh, Nietzsche, Wilde, Joyce and hundreds of thousands of anonymous people. In Cesare’s time, also Pope Julius II, Ascanio Sforza, Francesco Gonzaga, Alfonso of Ferrara and many other prominent men including a large percentage of the clergy suffered from the disease.

The disease was at its most terrifying and painful stage when it began to eat away flesh from its victims’ faces and bodies. Horrifyingly disfigured, the ones who suffered from the disease’s final stage tried to hide the atrocity of the effects behind a mask. Quite a few contemporary chroniclers wrote that Cesare did exactly this to hide his supposedly ugly syphilis-stricken face. Others hardly mention any disfigurement of his handsome features. But had the face of Italy’s most handsome man[2] truly become hideous?  This is rather doubtful for several reasons.

Poets and chroniclers of the time never considered the disease a social embarrassment; in fact, they wrote about it openly, but in Cesare’s case, it was deliberately used by his enemies to tarnish his reputation. Cesare having to cover his face with a mask to hide rotten skin fit perfectly with the evil image his enemies had carefully woven around his person.  Paolo Giovio, collector of portraits of famous men wrote about Cesare the following: ‘a livid rush overspread his face, which was full of pimples shedding matter. His eyes, too, were deeply sunk, and their fierce snake-like glance seemed to flash fire, so that even his friends and comrades could not bear to look upon them.[3].’ In the same quote however, Giovio also mentioned that: ‘yet, while flirting with the ladies, he had a wonderful knack of playing the agreeable.’ The Borgias were known to be particularly beautiful people. Cesare had been called Italy’s most handsome man and his face being destroyed by syphilis would be a particularly cruel stroke of fate and one that his enemies would celebrate and shout of the rooftops. Still, it did not exactly seem that one of Italy’s most beautiful and noble women, Dorotea Caracciolo, abducted in 1501 by Cesare Borgia, was repulsed by him.  This renowned beauty remained by his side for more than two years, even giving birth to at least one of his children, and after Cesare’s downfall, when she was ‘set free’, she did not seem to have been mistreated at all. On the contrary, the biographer Woodward wrote that ‘when it was all over, the lady did not seem especially aggrieved at what had occurred’.[4]

Around August 1503 Cesare supposedly suffered from a gumma, a typical syphilis wound in his face that irritated him. Some biographies mention that his skin fell of his face[5] yet none mention that he tried to hide this with a mask. Not even Machiavelli, who visited Cesare twice in November 1503 and who meticulously noted down Cesare’s every move, never once mentioned Cesare wearing a mask.

Proof that Cesare Borgia remained a striking person until his very last days lies in the testimony of a very old Spanish man who as a toddler witnessed Cesare Borgia at the head of his army marching through Mendigorria on his way to Viana. He remembered Cesare as being big, strong, handsome, and soro.[6] If Cesare truly had lost parts of his face, or if he had worn a mask, the toddler would likely have been intrigued by the mask or terrified of the disfigurement and at a high age remember exactly those features rather than Cesare’s handsome and proud bearing.

The myth of the black mask only turned Cesare Borgia into a more mysterious figure and added to his alleged ‘darkness’. It is known that he often wore masks like so many of his contemporaries did. Once a conqueror, Cesare became an inward and utterly secretive man out of sheer necessity and masks were a means to an end to remain mysterious, secretive and incognito, not because he needed to hide the atrocities of syphilis.

[1] Dunant, “Syphilis, Sex and Fear: How the French Disease Conquered the World.”

[2] Sabatini, The Life of Cesare Borgia.

[3] Dennistoun of Dennistoun, Memoirs of the Dukes of Urbino.

[6] ‘Soro’ is Spanish and a difficult word to translate. It is used to describe young falcons. It is probably best translated as ‘proud’ and ‘haughty’.