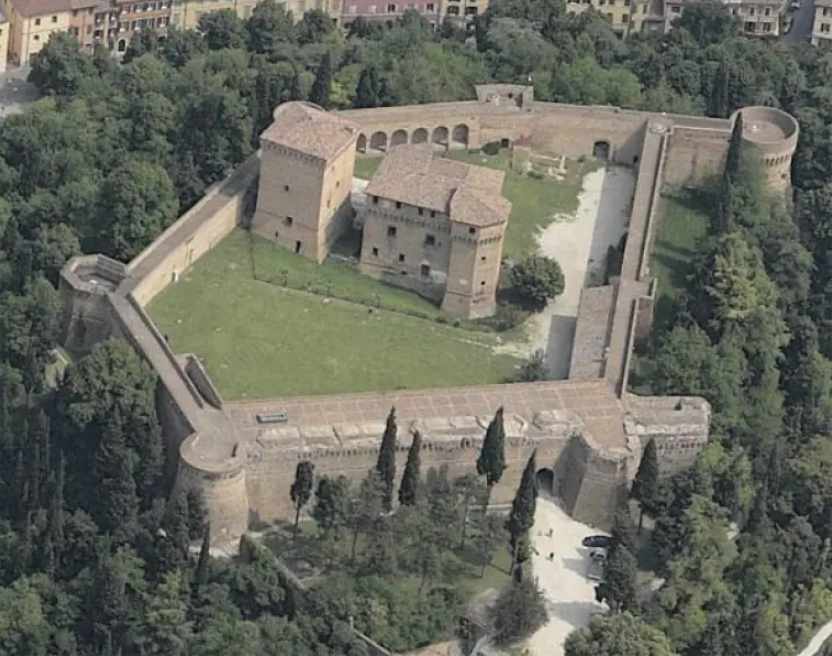 This past summer, I finally had the chance to visit the beautiful little town of Cesena.  Tucked away in the hills of the Romagna my Italian friends called it ‘una città bellina’ (a cute little town), but they wondered why on earth I would want to visit that ‘forgotten’ part of Italy and not rather spend my precious holidays in the splendor of Venice, Ravenna or Firenze; any of the other much bigger and more beautiful cities? Well, I had my reasons and besides, I needed new inspiration for my book. And so, we booked a house on one of the hilltops of the Romagna Apennines, very close to idyllic Mercato Saraceno (another place relating to Borgia history), and we explored the entire territory that was once Cesare Borgia’s playground. But in this blog post today, I will walk you around in Cesena.

Cesena is an ancient town and its history goes back many hundreds of years. In 1465, Pope Paul II granted the city “in perpetual privilege” a ‘giostro’ or a jousting tournament.  It was always held on the Piazza Maggiore (today Piazza del Popolo) preceded by a historical or allegorical procession, and the winner was entitled a prize of 25 pure gold florins paid by the Apostolic Chamber: a small fortune. Often, when distinguished guests arrived, such as papal legates, ambassadors, princes etc. the city would offer its giostro as a tribute to them. It is very likely that Cesare Borgia watched and even participated in one of these ‘giostros’ while he spent his Christmases in Cesena.

The rules, number of clashes and names of the winners have been carefully preserved in the state archives of Cesena and perhaps it is possible to find information on Cesare’s achievements in 1501 and 1503, if at least he participated as is often mentioned in contemporary chronicles. The rules were the following: the knights could clash eight times and if there was no winner, then the one who had achieved the highest score would be the winner. Points were scored for each fight and were won based on which part of the body was hit and the strength of the blow.  The best score was attributed for blows to the head or making your opponent fall on the ground. Hitting the chest or the body was less valuable.  Obviously, these jousts were extremely dangerous because the knights did not wear a shield and they were supposed to take the blows without hesitation. They were also supposed to be chivalrous in the joust: no attack when someone had fallen down, and no hitting the opponent’s horse.

High above the town, on the Garampo Hill, as if built on a pedestal, lies the Rocca Malatestiana, proud and lonely. In 1380 construction work began on the initiative of Galeotto Malatesta, who made it the strategic point for the defense of the city. The walls, formed by high and mighty curtains, have an irregular pentagonal plan, with seven external towers of different shapes. In the summer of 1502, on commission of Cesare Borgia, Leonardo da Vinci was stationed in Cesena to inspect the fortifications and defense system of the Rocca. At that time, there were five gates to defend the access of the fortress. They were all located in hair pin bends along the path that led to the castle. Quite impressed with this technique, Leonardo drew a sketch of it in his travel notebook which is kept in Paris.  Today, the entire hill on which the Rocca is built is covered with a green park. Back in the days of Cesare, there was not a shrub in sight. 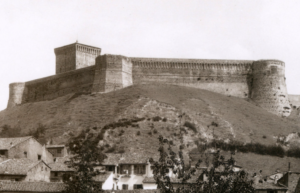 The Fortress is truly majestic with panoramic terraces and very wide walkways inside the curtains that offer an amazing view of the entire region. The courtyard includes a fortified citadel with two imposing buildings, the Maschio and the Palatium.  It was especially the Palatium that catapulted me back into the past because here on the ground floor was the torture room. Quite likely, it was here that Cesare’s former captain Ramiro del Lorqua was tortured and where he admitted that he had agreed with the conspirators to shoot Cesare in the back with a crossbow. 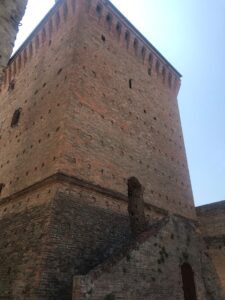 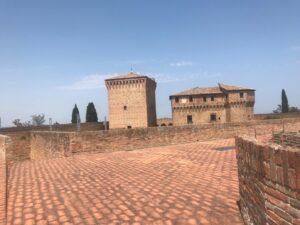 The Rocca is connected to the Piazza del Popolo and the Palazzo Malatestiana where Cesare used to live when he stayed in Cesena.  The piazza is a gorgeous little square with a beautiful fountain dating designed by Masini. Exactly on the spot where the fountain is located, Ramiro del Lorqua was decapitated for his crimes that included cruelty against the people of Cesena, stealing food supplies during famine, but most importantly, conspiring with the rebel captains of Magione. 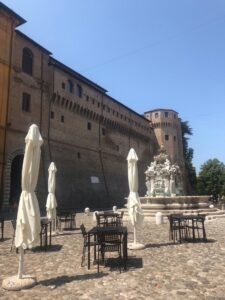 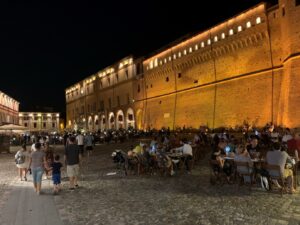 Both the Rocca and the piazza are places that ignite your imagination, and you easily imagine what happened here more than 500 years ago, but what truly left me speechless was a tangible remnant of the glorious Renaissance past in the Biblioteca Malatestiana. No library has ever left me speechless the way this library has. More than 500 years old, it was founded by Novello Malatesta with the aim to ‘give’ it to the people of Cesena, and thus creating the first civic library in the world. Deep inside the modern library, an old walnut Renaissance door from 1452 with original keys and on top of the door, the original coat of arms of Novello Malatesta leads to one of the oldest libraries of the world. When both antique keys are put inside the keylocks, the massive door swings open towards the inside, and in front of you lies a room you must see with your own eyes: so gentle is the light that shines through 44 Venetian windows, so delicate the colors, the entire inside of this room oozes of ancient knowledge and history. Fifty-eight ancient benches to which even older manuscripts and parchment books are chained. The aula has the design of a small basilica with three naves. At the end of the middle nave, there is a rose under which Novello Malatesta is buried. 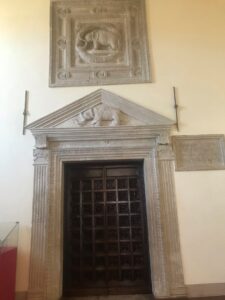 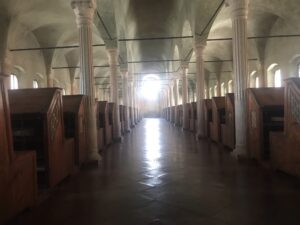 Here, in the middle nave, nobility, princes and kings have walked. And in 1502, so did Madonna Lucrezia Borgia. On her way to Ferarra to her wedding, she stopped in Cesena, her brother’s capital, and was welcomed like a queen. One of the excursions that was organized for her was a visit to the then 50-year-old humanistic library for the people of Cesena. Lucrezia must have seen the keys put in the door to enter the library, and she then must have walked the middle nave all the way to the end. But then, she did something very odd. She must have walked to the windows from which faded light shone inside and in a sudden act of melancholy, she engraved her name on the windowsill. We will never know what went on in this young woman’s mind to make her do this. When did she do this? Was she unaccompanied? Was it a stolen moment? And what did she use to carve her name in the stone? A hair pin? A stone? And why? So many questions, and we can only guess the answer. In any case, it is only very recently that her name was found among many other graffiti in the library, and it caused a stir among historians. 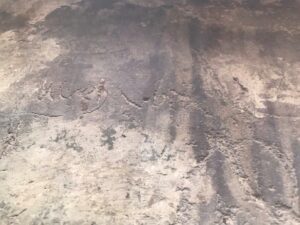 Needless to say I am eternally grateful to the Biblioteca Malatestiana that I was allowed inside the Biblioteca alone with one historian who showed me where Lucrezia’s name was located. In any case, seeing this relic from the past and touching it with my own hands was the highlight of my holiday, and no visit to Venice, Florence or Ravenna could have ever replaced that amazing experience.

Next time: The Castle of La Mota in Spain

A huge thank you to the Biblioteca Malatestiana for allowing me to take the picture of Lucrezia Borgia’s graffiti.

Picture of the Rocca Malatestiana around 19o0 borrowed from website: https://cesenadiunavolta.it/il-vestito-della-rocca/

Picture of the Rocca Malatestiana from the air borrowed from : https://www.geometriefluide.com/it/rocca-cesena/#cookieOk

The following sources were used: