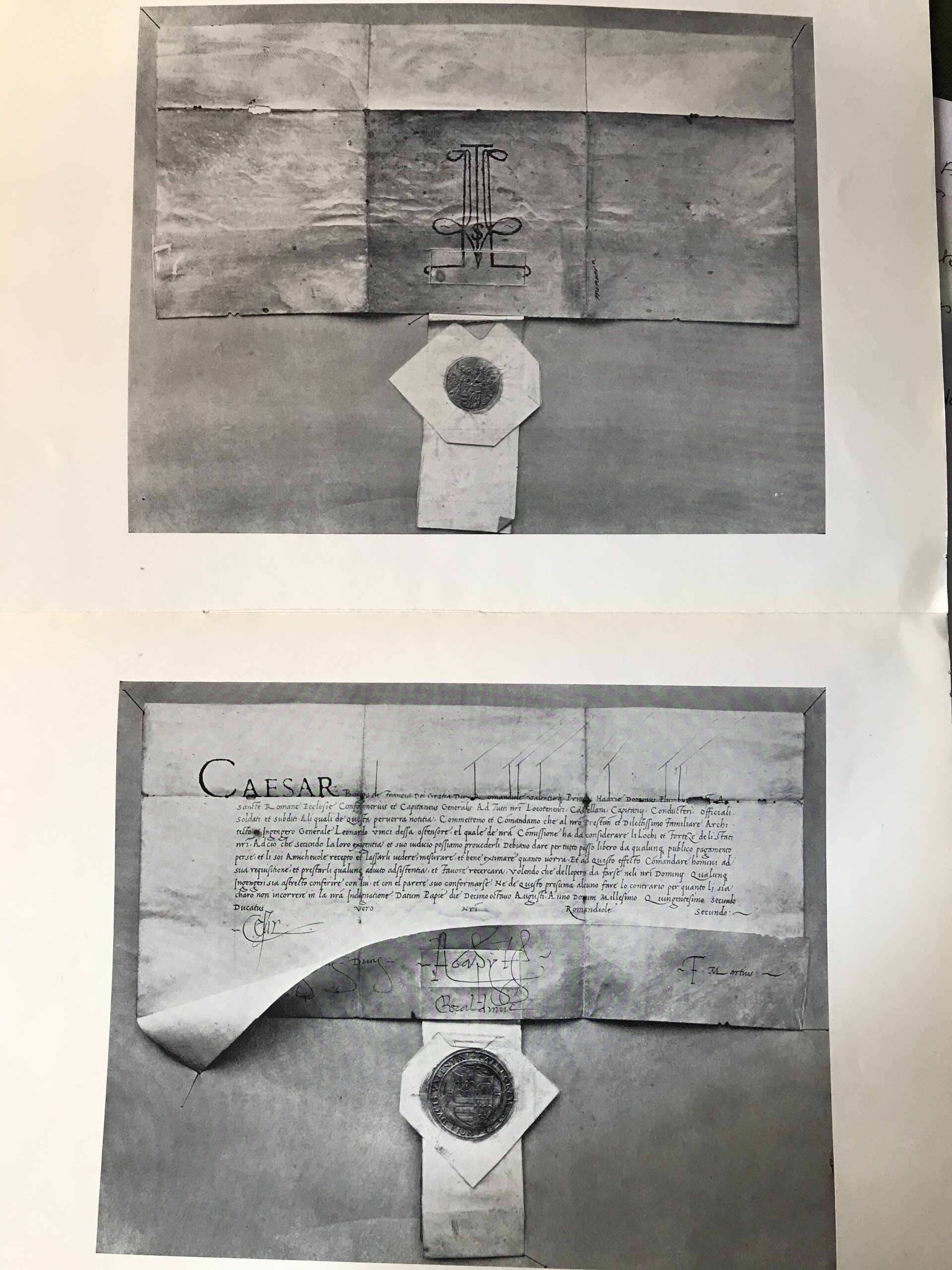 A newly released tv series produced by Italian Lux Vide in collaboration with Rai Fiction makes an attempt to tell the story of one of history’s greatest artists: Leonardo da Vinci. Heartthrob Aidan Turner plays the role of a heavily tormented Leonardo who considers life a burden, and art as a means to escape it. In the series, however, Leonardo never seems to be able to flee from his gloomy, cursed and agonizing existence. The deepest black hole he experiences is when, in episode 6, he is hired, or rather ‘taken hostage’ by Cesare Borgia. But did this really happen?

Of course not! The truth is rather the complete opposite.

Each episode deals with one of Leonardo’s masterpieces, but also with the destruction of it, or with a constant emphasis on Leonardo’s incapacity to finish his work and the pressure this causes his shoulders to slump. Watching Leonardo carrying the pain of the world on his shoulders and always submissively searching for work somehow gnaws on the image of the incredible ‘maestro’ he truly was. But not only does the series portray the artist as if his life was only despair and misery, they also make him go through the ordeal of a murder case in which he is the main suspect. Fictional freedom in these entertainment series is fine by me to a certain extent, but in ‘Leonardo’, the script writers took an inch too much leeway. The greatest artist of all time was never accused of murder; his life was rich and full of valuable content so why this hideous red thread of a murder woven into his story? The problem with such television series which combine a few historical facts with lots of fictional elements to ‘embellish’ the story is that now an entire generation will actually believe that Leonardo da Vinci was accused of murder. Ugh.

In the various episodes, Leonardo rubs shoulders with famous people such as Verrocchio who used Leonardo as a model for his David statue when Leonardo was just a sixteen-year-old boy. Leonardo then moved on to Ludovico Sforza’s (Il Moro) patronage. The pale and red-haired actor playing Il Moro (The Moor) was an odd casting choice as the original Moro was called that way exactly because of his dark complexion, black eyes and black hair. The series portrays Ludovico as a powerful yet peaceful patron of the arts who felt great love for his young cousin Gian Galeazzo, the rightful heir of the Duchy of Milan. Again, reality was quite different. It is assumed that super ambitious Ludovico il Moro, eager to be Duke most likely first killed his older brother Gian Galeazzo, the true Duke of Milan, and then afterwards poisoned his dead brother’s son who inherited the ducal title after his father’s death.

It is true that Ludovico Sforza was an art maecenas, and that he hired Leonardo for several amazing commissions among others ‘the Cavallo’ (the horse statue) and the Last Supper. What is, however, not mentioned in the series is that Leonardo da Vinci applied at the Milan court to be hired as military engineer; in those days, the most prestigious court position of all. It is odd how historians and script writers try to ‘protect’ Leonardo from the terrible stain of being a military engineer when this was clearly his ambition.

In the series, Leonardo then supposedly falls into Cesare Borgia’s claws, and the series’ very very ‘Machiavellian’ Machiavelli reveals to Leonardo that he sold his soul to the devil. Here the series begins to take fairytale proportions because the truth is so far away from what we watch in the series. Leonardo had probably been travelling together with Cesare for a while. As opposed to Ludovico il Moro, Cesare Borgia did recognize the genius of Leonardo and was willing to give him all the freedom he wished for and to hire him as a military engineer. The passport (see the picture above) that Cesare had made for Leonardo showed the utter respect and freedom Cesare gave Leonardo and the liberty to travel throughout the Duchy of the Romagna and the papal states without being hindered by anyone or anything. It also gave him the authority to hire as many people as he wanted, and to buy whatever he needed to execute his job.   Under Cesare’s patronage, Leonardo created maps, drew machinery, rerouted rivers, dug canals, fortified castles and, at the same time, unleashed his creativity in understanding the world around him. Yet in the series, Cesare is portrayed as Lucifer himself as he says: ‘Design me a machine that kills one hundred souls. Only then you can have your soul back.’  With all the recent research that exists on the Borgias and da Vinci, it is truly mind blowing why Cesare Borgia is portrayed as Leonardo’s hostage taker, and as a blood thirsty devil.

Leonardo and Cesare probably first met in Milan when the artist still worked on the Last Supper.  According to Bramley[1], there is no doubt the two appreciated each other because both men were charismatic, highly intelligent, they loved beauty and like Leonardo, Cesare Borgia loved conundrums. There are documents that prove that Cesare and Leonardo worked closely together on many projects. A list of questions that was sent by Cesare to Lorenz Beheim show both men’s interest in alchemy such as: how to walk on water, how to create sleeping powder and cast it via a catapult into a castle. In his testament, Leonardo also lovingly mentioned a treasured coat he had received from Cesare Borgia by writing the name of his previous owner in the inventory; proof that he highly esteemed the gift and respected the one who had given it to him. No other items in his testament bore the names of previous owners.

Max Bennett, the actor who plays Leonardo in the series, does a good job: he’s charismatic, he radiates power and he has the charm that Cesare Borgia no doubt had as well. The series, however, is loosely based on a few historical facts and a lot of fiction. Like with so many other historical costume dramas and series, the actual truth would have been equally easy to film and produce, and so much more interesting to watch.